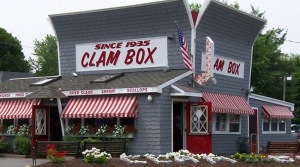 Dimitrios Theodore Aggelakis owner of the Clam Box of Ipswich and lifelong resident of Timberhill in Ipswich, Massachusetts, tragically passed away [at the age of 43, on Saturday December 4th 2021 after a brief illness.

Dimitri was born on September 20th 1978.He was the only child of Theodore and Marina Aggelakis.He attended North Adams State College after graduating from Ipswich High School in 1997. Dimitri followed in his parent’s footsteps and became a skilled restauranter with a passion for seafood.  His favorite pastime was traveling and visiting his family in Greece. Dimitri loved nothing more than spending time with his family, watching football and enjoying family dinners with his wife and daughter. Dimitri captivated his friends and family with his charm and charisma.  Dimitri’s heart is larger than life and he would do anything for the people he loved.

Dimitri married the love of his life Johanna Pechilis in 2018 and they welcomed their daughter Marina into the world this past October. Marina was the gift that Dimitri wished for his whole life, she was his light and he was hers. He will live forever in our hearts.

Dimitri was predeceased by his beloved mother Marina “Chickie” Aggelakis (Galanis) of Ipswich, his grandfather Peter Galanis of Ipswich and his grandparents Dimitrios and Athenasia Aggelakis of Amaliada, Greece. He is survived by his grandmother  Stella (Pappalimberis) Galanis of Ipswich, father Theodore Aggelakis of Amaliada, Greece;, his wife Johanna Aggelakis (Pechilis) of Ipswich, his infant daughter Marina Eva Aggelakis, his uncle Leonidas Aggelakis and his wife Kathy, his aunt Afrodidi Svarnashis, aunt Elaine Kaszuba (Galanis) and her husband Andrew, his uncle John Galanis and his wife Chandra.    He is also survived by his favorite cousins Dina Ward & Iliana Svarnas as well as many family members,great friends and his Clam Box Crew.

A funeral service will be held Monday  December 13th.  at  10:00 A.M.  at the Assumption of the Virgin Mary Greek Orthodox Church  8 Lafayette Road, Ipswich.  Burial will follow in the Highland Cemetery  29 Town Farm Road, Ipswich.  Visiting hours will be Sunday  December 12th.  from  2:00 to 5:00 P.M.  in the Morris Funeral Home  45 North Main Street, Ipswich.  The family asks that all in attendance in the funeral home to wear a facial covering.  In lieu of flowers please make a donation in Dimitri’s name to the Greek Orthodox Church of Ipswich  P.O. Box 6  Ipswich, MA  01938.  To send a letter of condolence to Dimitri’s family please go to:  MorrisFH.com .

To send flowers to the family or plant a tree in memory of Dimitri, please visit our floral store.