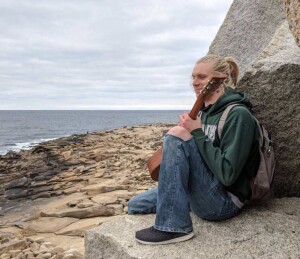 Eric Pecina of Ipswich, MA passed away in a swimming accident on April 23rd. He was 24. Eric was the cherished son of John and Diana Pecina of Princeton, NJ, and the beloved brother of Tess Pecina of Mt. Holly, NJ. He will be missed by many.

Eric was born in Glendale, Arizona, where he attended Sunrise Montessori preschool. In December 1999, he moved to New Jersey with his family, where he was excited to build his first snowman. Eric spent his early childhood years in Somerville. He attended Temple Shalom Preschool and Vanderveer Elementary, joined the Cub Scouts, sang in the choir at the United Reformed Church, and loved climbing the maple tree in the backyard.

When Eric was 8, the family settled in Lebanon Township, New Jersey, in an old stone house along the Musconetcong River, where Eric loved to explore the woods and play in the swimming hole out back with his sister and friends. He attended Valley View and Woodglen Elementary schools, and was an enthusiastic participant in the LTAA soccer, baseball, and basketball programs as well as the Woodglen soccer team. He was also an active member of the Excel speed skating team, thriving on the intensity and excitement of every race. He continued to enjoy Scouts, and played the trumpet and guitar in the school band. He brought many pets into the family home, including a hamster, several frogs, a few salamanders, and a beloved cockatiel named Ringo.

Eric attended Voorhees High School, where he was an active member of the swimming and tennis teams, and continued to pursue both music and Scouting. He was blessed with the family “music gene” and loved to play and compose. He played trumpet, baritone, and tuba in the Concert and Marching Bands, and was elected Spirit Captain of marching band during his senior year. He studied jazz piano with Steve Hudson and spent a summer instructing younger students at Rock Camp. He also built his own home music studio for creating Electronic Dance Music (EDM), a passion he continued to enjoy as a college student and young adult. Eric continued to pursue Scouting as a member of Hunterdon County Troop 92. He especially loved hiking and camping, and under the guidance of Joe Stanski and others, he grew to become a strong leader and teacher of the younger boys. Eric attained the rank of Eagle Scout in 2015.

Eric went on to study biology and mathematics at SUNY Binghamton, graduating in 2019 with a Bachelor of Science in Cell and Molecular Biology and a minor in Mathematics. While at Binghamton, Eric spent three years as a research assistant in the Biomedical Anthropology and Neuroscience lab, supporting the work of Dr. Ralph Garruto and Dr. Amanda Roome to advance the study of Lyme disease. He also served as a member of the Vestal NY EMT squad, and completed internships at the Pocono Environmental Education Center and Abbott Point of Care in Princeton, NJ. In his spare time, he enjoyed running, gaming and connecting with friends, both online and in person. He was also an avid language learner. He taught himself Swedish and became sufficiently fluent to read Hobbiten, the Swedish translation of The Hobbit, one of his long-time favorite stories.

In the summer of 2019, Eric discovered LifeMine Therapeutics of Cambridge, MA, and Lifemine discovered Eric. He joined the company as a research associate, working first at the company headquarters in Cambridge, and later at the new laboratory in Gloucester to initiate operations at the facility. Eric loved his work at LifeMine. He shared the vision of founder Dr. Greg Verdine to discover medicines to conquer previously unconquerable human diseases. Eric worked closely with the other members of the Gloucester team and was a positive and focused contributor to the company’s work.

Eric lived every day to the fullest. He loved experiencing nature and the elements, climbing trees, exercising, gaming with friends, meditating, fasting, perfecting his whole food, plant-based diet (with exceptions for celebrations...), creating music, discussing mathematics and philosophy, hanging with friends, colleagues, and family, and living life in the moment. He will long be remembered for his kind and gentle nature, his physical, intellectual and emotional strength, his love and compassion for others, and his “all-in” approach to life.

Eric was a student of Vipassana meditation. He meditated daily and was passionate about his practice. He was planning to attend a retreat in December of this year at the Insight Meditation Society (IMS) Retreat Center in Barre, MA. In lieu of flowers, the family requests that donations be made to IMS, helping to keep the Retreat Center affordable for as many as possible  (https://www.dharma.org/support-ims/.).

"If you missed the service, you can view the same at your convenience by clicking on the link below: https://youtu.be/8BwPefVYRGw "


Video is available for this event