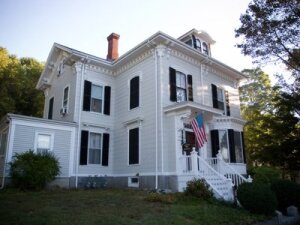 He leaves behind his wife of 53 years Margaret E. Morley.  He was born and attended school in Lowell before entering the Navy in 1961.  He became a Navy corpsman and was part of the Navy Glee Club.  He was discharged as an operating room technician in 1964.  Following his Naval service, he worked at multiple hospitals including Mass General, Boston Eye & Ear and Beth Israel, where Ray and his beautiful wife met at one of the first open heart surgeries at Beth Israel.  Ray and Margaret moved to the North Shore in 1970, settling in Ipswich in 1974. He briefly worked as an oxygen tech and administered to many New England Patriots players at their home games. As a successful entrepreneur, he ran “The Antenna Man” for over 10 years. In 1996 Ray and Margaret accomplished their dream of opening a Bed and Breakfast, which is now fondly known as the Ipswich Inn.  Everyone loved Ray’s three-egg breakfasts and scratch-made corned beef hash. The Inn grew from a private home to a community staple and gathering place.

Ray committed his life to many different service organizations throughout his life. In the early 1980s, he was a Cub Scout leader and a GALS softball coach, for his daughter’s team the “Hush Puppies.”  From there he devoted his time to Ipswich volunteer firefighting, teaching Basic Life Support for the American Red Cross, and various town committees and boards. He loved being a Selectman, Finance and member of the Water Committee for the Town of Ipswich, as well as School Committee for Whittier Technical School.  Ray was a member and Past Master of the John T. Heard Masonic Lodge of Ipswich.

For over 30 years, he was a member of the Ipswich Lions Club, and was known for his famous clam chowder which was always a finalist at the annual Chowderfest.  He dedicated his time to the Rotary Club  (he was presently the President of the Ipswich/Rowley Club), Cape Ann Chamber of Commerce, Ipswich Chamber of Commerce and the Dinner Bell. Ray had a huge heart and was always willing to help anyone in need.

Ray’s other hobby was his passion for the open sea and being on his latest boat, even if it wasn’t out on the ocean. A “quick” trip to see the whales was a common outing, and he was so happy to take anyone along. He loved to chase a good steak dinner. He and his friends  Bob, Bruce and Pat, made pilgrimages to many establishments, no matter the distance.

Ray was well known in the community as a leader at the First Church, a chef, a reader of scripture, a teacher, a host, a comedian, a magician and a lover of the Gospel of Christ. Ray loved to sing and was known to perform during holiday services at the church. He was a previous member of Our Savior Lutheran Church in Topsfield. He had the privilege of marrying many couples, and so many lives were greatly influenced by his advice and mentoring.

His many, many, many friends and loving family will remember the Ipswich quarter trick and his “duck call.”  He was working on encapsulating his wonderful life through a series of short stories called “You’ve Got to Be Sh*&ing Me.”

His greatest joy was his children and grandchildren. He loved taking them for rides in his convertible and out for ice cream. He was devoted to his sons Christopher (Jennifer) and Jameson (Mickie) Morley and daughter Joanna (Derek) Cooper; granddaughters Cailey, Abby, Lilly and Lola all of Ipswich.  Sisters Susan Pappas, Martha Simpson, Dorathea Slack and brother Greg Pappas, and many nieces and nephews. He was preceded in death by his brothers Michael and Robert Morley, and stepfather Mello Pappas.

The family will be hosting a celebration of life reception on Sunday, October 16th, 12pm-3pm at the Masonic Lodge in Ipswich.  Brief Masonic and Military Honors will begin at 1:00. Family and friends are welcome.

In lieu of flowers, memorial contributions in his name may be made to Open Door Pantry https://theopendoor.networkforgood.com/, The Open Door, 28 Emerson Ave, Gloucester, MA 01930.

Arrangements are under the direction of the Morris Funeral Home of Ipswich.  To leave condolences, please visit www.MorrisFH.com.