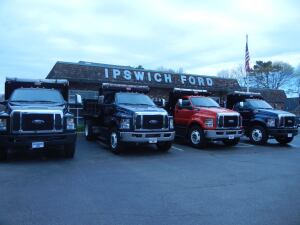 McNEIL, Robert Manson of Ipswich, Massachusetts May 8, 2020 after a long fight with cancer. He died peacefully at home with his family. Son of Lawrence Sr. and Mary McNeil. Beloved husband of Rita McNeil. Loving father of Robert Jr., Rebecca, James, and Colby. Brother of Lawrence Jr. and his wife Rebecca , Christopher and his wife Martha , sister Marilyn McNeil, and predeceased by his brother Cpl. Joseph D. McNeil, USMC.

Robert “Bob” grew up in Milton, went to St. Gregory’s in Dorchester and became a “Triple Eagle” at Boston College High School, Boston College and Boston College Graduate School of Business. Bob joined the ROTC program at Boston College. He was commissioned a Second Lieutenant in the U.S. Army Medical Service Corps upon graduation. He served at Walter Reed National Military Medical Center in Washington, D.C. and was a decorated First Lieutenant. Bob then went to work with his father and brother Larry at Gibbs Ford in Saugus, Mass. as car and light truck manager.

In March,1984 Bob and Larry opened Ipswich Ford. They quickly established a reputation in town as a quality place to buy a new Ford car and truck and to have Ford cars and trucks serviced. They turned a Ford dealership in Ipswich into a community institution and a home for so many. Ipswich Ford operated for 37 years until its sale in January of 2020.

Bob was very active in supporting the YMCA, Chamber of Commerce, Rotary Club where he was a Paul Harris Fellow, and was an usher for many years at Our Lady of Hope Parish. He was a pillar of his community, putting on an annual Old Car Show, helping organize Ipswich’s World War II 50thAnniversary Celebration and parade. For many years he supported the annual Memorial Day and Veterans Day parades and most recently helped organize the Ipswich “Music Town” fest in 2019. He also chaperoned Boy Scouts on Ipswich River canoe trips and overnight camping trips by Crane Beach. Bob was always willing to lend a helping hand. He was a loving son, husband, father, brother, brother-in-law, uncle and true blue friend.

Burial was private in the Veterans’ section of the Cowles Memorial Cemetery in Ipswich, Mass.

Arrangements are under the direction of Morris Funeral Home of Ipswich, Mass

To send flowers to the family or plant a tree in memory of Robert M. McNeil, please visit our floral store.

You can still show your support by sending flowers directly to the family, or by planting a memorial tree in the memory of Robert M. McNeil
Share a memory
© 2021 Morris Funeral Home. All Rights Reserved. Funeral Home website by CFS & TA | Terms of Use | Privacy Policy